What is the Definition of Insolvency?

The legal definition of Insolvency is set out in Section 123 of The Insolvency Act 1986 and also sets out two tests to consider whether a company is insolvent. 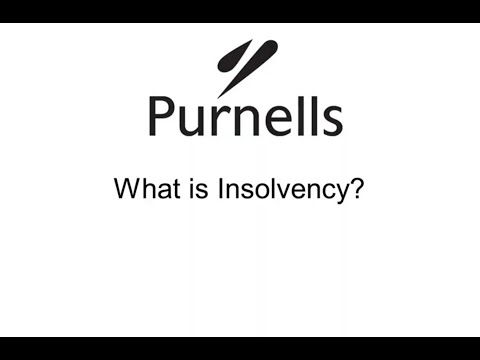 There has been a lot of debate and case law over the years as to which test is the most appropriate in any given circumstance and the leading case is BNY Corporate Trustee Services Limited v Eurosail 2007 3BL plc, which is often called the Eurosail case.

Eurosail said that if a company had ceased to trade, or was unlikely to have any further income, then the most appropriate test to determine insolvency would be the balance sheet test, and if its liabilities exceed its assets, including contingent liabilities, then the Company would be Balance Sheet insolvent.

However if the Company was going to continue to trade and was likely to receive further income, then the cashflow test would be the most appropriate option to determine the Company's insolvency.

Typical signs of insolvency, and particularly cash flow insolvency are:

If any of these signs are present then it may be a good idea to speak to a Licensed Insolvency Practitioner to obtain advice on the Company’s finances and the options available to it.

What should you do if your company is insolvent?

Once a director is aware that their company is insolvent, that director has certain duties placed upon them.  These include:

In a majority of cases, once a director knows their company is insolvent, they will need to cease trading immediately in order to protect creditors' interests. However, sometimes there can be a benefit in continuing to trade in the short term, for example to complete a lucrative project which will bring in additional realisations and limit liabilities for breach of contract.

The over arching principle that directors must consider is whether what they are doing is going to improve or worsen the creditors position.  This is why expert advice is needed, not only to protect the company and its creditors, but also the director's personal position.

Do I need an insolvency practitioner if my company is insolvent?

A licensed insolvency practitioner is a qualified and experienced professional who is authorised, licensed and regulated to provide advice to insolvent companies and their directors.

A licensed insolvency practitioner should always offer you a free first meeting to understand the company's situation and then talk though and explain the various options available to the company.  By taking advice from an insolvency practitioner, not only will you receive professional and independent insolvency advice, which in turn will allow you to make an informed decision, to act in the best interests of the company and its creditors, you are also demonstrating that you are a responsible director and acting in accordance with your fiduciary duties and therefore are less likely to face later criticism.

A licensed insolvency practitioner will not only be able to advise you on the options available but will also be able to act for you or the company as the appointed Office Holder to deal with the company's insolvency.  Therefore taking advice early is an important step.

If a company is considered insolvent then it can be placed into an Insolvency Procedure such as:

(More information in respect of each procedure can be found by clicking on the above links.)

More often than not however action can be taken before a company or business is formally insolvent to try to prevent a formal insolvency, or implement a controlled wind down of the company.

Quite often insolvency does not have to be a terminal affair and the underlying business or company can be saved as a going concern provided that advice and action is taken early.

If you would like to discuss your company’s affairs and obtain some free insolvency advice please contact Chris Parkman on 01305 458 383 or email him at chris@purnells.co.uk.