What is a Company Voluntary Arrangement? - How a CVA can help Your Company

If your limited company is insolvent, has cashflow issues and is struggling to pay its debts, it could use a CVA or Company Voluntary Arrangement to continue to trade and pay a proportion of its unsecured creditors over a fixed period of time, usually 3 to 5 years. 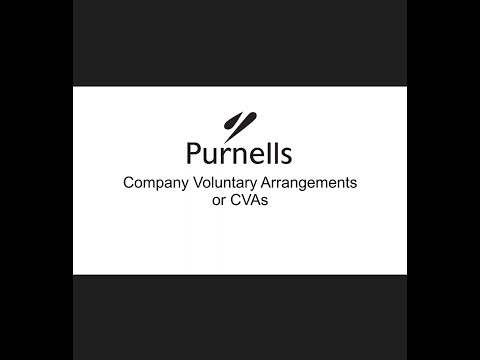 What is the purpose of a CVA?

In simple terms the purpose of a CVA is to propose a 'deal' to creditors, which enable the Company to continue to trade as a going concern, and hopefully will lead to the Company trading out of its financial difficulties.

The form of the proposed deal will depend on the particular circumstances of your company.  Typically however there are three types of CVA, as follows:

A CVA can be used to prevent bailiffs from attending at your premises and seizing goods, which would otherwise prevent the business from continuing to trade.

A Company Voluntary Arrangement can also be used to prevent a winding up order from being made if a petition has been issued or is being threatened.

In recent years Company Voluntary Arrangement have also been used to assist with rent negotiations with landlords, particularly with large national high street firms who are household names.  This has resulted in various challenges through the Courts, which has provided further clarity on what is possible using a CVA.

How is a Proposal Agreed with Creditors?

Once that proposal has been agreed and signed by the directors, a copy of the CVA proposal is then sent to all known creditors of the company, whether secured or unsecured, and a decision procedure of creditors is called.  Usually when putting forward a Company Voluntary Arrangement a virtual meeting of creditors would be the most appropriate decision procedure to use.

It is at that virtual meeting that the CVA proposals are considered by the company’s creditors.

The information to be presented at the virtual meeting is typically the same as that which can be found within the CVA proposal document, a draft of which can be found by clicking on the link..  For that reason creditors often choose to vote by post rather than attend the meeting in person and will vote to either:

Accordingly once agreed, creditors cannot take any enforcement action outside the CVA, even if they voted to reject the company’s proposals or did not vote at all.  This is one of the main benefits of a CVA, particularly if there is one creditor who is being particularly difficult or unreasonable, to the detriment of the other creditors and company.

While the law sets out the information that must be contained in a CVA proposal, it does not set out what the offer to creditors should be. For example, it is possible to put forward a proposal offering creditors the option to exchange their debt for equity in the form of shares, which we have assisted with on several occasions.

Accordingly a CVA proposal is extremely flexible and can be adapted to suit a company's individual needs and the expectations of its creditors. It is therefore important to discuss what you are trying to achieve with your insolvency practitioner and Nominee.

Also if there is a majority creditor, it is quite often worthwhile speaking with that creditor in the early stages to see what would be acceptable to them.  If the main creditor is brought on board early in the process, then it is far more likely that the CVA Proposal will be approved by the creditors.

There are two types of Company Voluntary Arrangements

The index to the right-hand side of this page refers to two distinct types of CVA, which are as follows:

By reading the following case studies you will see that there are many ways to structure a CVA:

What are the Benefits of a Company Voluntary Arrangement?

A CVA with or without a moratorium, could help your company avoid the consequences of statutory demands and winding up petitions as well as other types of creditor enforcement action.

Furthermore, an approved CVA will relieve your company of creditor pressure as it will draw a line in the sand in so far as historic debt is concerned.

Another benefit of a Company Voluntary Arrangement is that the directors no longer have to deal with the creditors, therefore allowing them time to focus on more important work such as continuing the run the business.  It also allows the directors to retain far more control over the company and business and any other insolvency option.

The Insolvency Practitioner involved will be acting as a Supervisor, and as the name suggests, his or her role will be to supervise and monitor the Company during the CVA period.

A CVA will often be a cheaper and more cost-effective solution when compared to other insolvency options.

As the Company is continuing to trade, the Supervisor is not required to investigate the affairs of the Company and the conduct of the Company's directors; furthermore no report to The Insolvency Service is required.

If you would like a free no obligation meeting to discuss how a CVA could help your company, or how the mechanics of a Company Voluntary Arrangement would work in your circumstances, please contact Chris Parkman of Purnells on 01326 340579 or by emailing chris@purnells.co.uk.